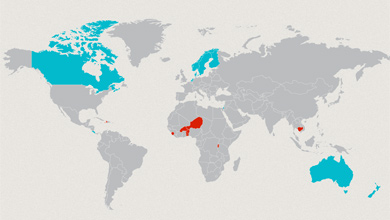 Researchers say countries are happier because of the society and culture around them. The corporate world learned that lesson long ago. A new study conducted by researchers at Gallup has been released by Forbes surveying thousands of respondents over 150 countries, between 2005 and 2009, in an attempt to measure two types of well being.

The outcome, say the researchers, offers up an in-depth analysis of which countries are the world’s happiest, and which countries remain astutely less gung-ho regarding their outlook on life. Researchers first asked subjects to reflect on their overall satisfaction with their lives, and rank their answers using a “life evaluation” score between one and 10. Second, participants were asked questions about how they had felt the previous day, allowing researchers to score respondents’ “daily experience” scores – things related to whether participants felt well-rested, respected, free of pain and intellectually challenged or engaged. According to the analysis, subjects reporting high scores were considered “thriving”, with the percentage of thriving individuals in each country then being used determining the rankings.

Scandinavian countries faired particularly well, with Denmark reigning supreme as the world’s happiest country according to the poll. And while researchers proffered that the report proved age-old myths like “money does indeed buy you happiness” correct, it also suggests that there’s much more to happiness than a hefty bank balance. “Given that money is an object that many or most people desire, and pursue during the majority of their waking hours, it would be surprising if success at this pursuit had no influence at all when people were asked to evaluate their lives,” say researchers.

However, while income undoubtedly influenced happiness, it did so for a particular kind of well-being; and day-to-day happiness – say researchers – is far more likely to be associated with how well an individual views their
psychological and social needs. Take a closer look at the Forbes’ Gallup World Poll here:

The pursuit of happiness

Of course, happiness is something we all strive for all in aspects of our lives: from relationships, to financial security, to career success. As such, happiness at work has become a key focus for businesses in recent years.
As such, more and more businesses are now concentrating on instilling a healthy, productive and encouraging workplace culture that not only allows employees to find a healthy work/life balance but helps the company to thrive. In essence, the paradigm shift currently happening in the corporate world is akin to the results demonstrated in the Gallup World Poll: while financial gains (i.e.: a correct job fit) certainly impact our happiness, it’s the society around us that defines our state of mind the most.

It’s a lesson being well-recognized by successful business leaders too. In a recent two-part broadcast entitled Managing Your Greatest Asset on executive business channel MeetTheBoss.tv, for instance, the likes of Ellyn Shook, Global MD for HR at Accenture, Hugh Hood, HR Director at BT Wholesale, Alan Kaye, SVP HR at Mattel and Misty Reich, HR Director at KFC, discuss the importance of a strong corporate culture and explain just why it is more critical than ever to get that culture right. “If you’ve agreed what ‘great’ looks like, and what you need to change to get there, then it becomes about how measure that and holding the mirror up on a regular basis,” notes Hood. Happiness makes the world go round? Perhaps.

Find about more about lessons in workplace culture at MeetTheBoss.tv

Connect with industry leaders with our virtual roundtables

“ The quality of the other members of the roundtable was exceptional ”